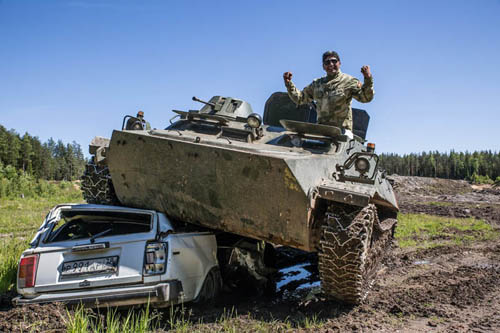 Tank-Tour is a company which organizes different military tours in St Petersburg. In our work we use real Russian Army armored vehicles and tanks. Besides we give our customers the opportunity to see and take into hands different armament of the former Soviet and current Russian Army: from the legendary AK-47 to the latest models. A standard item of every our program is disassembly and re-assembly of a Kalashnikov rifle,  shooting AK-47 and real tank-ride. We conduct such events for both Russian citizens and expats. People from all over the world have been among our customers, such as China, USA, France, India, Austria, Morocco etc.

Base program of a Tank-Tour military style event. Below is just one example of a big variety of Tank-Tour organized military tours in St Petersburg.

Transfer by military trucks and jeeps.

Program price depends of amount of people, what kind of tanks you choose and number of options.

We can also provide an interpreter at an extra charge as needed.

We can organize jeeping on Russian military jeeps in Saint-Petersburg, or offer to drive real Russian tank, survival course in the wild nature near SPb, you can see private Russian military unit or to take Russian armored vehicle BTR as taxi (unusual taxi) in S-Petersburg. Tank-tour conducts extreme excursions in old military bunkers. Every tour may be organize for groups of tourists or individuals. You can hear something interesting about Stalin and his decrees. Real Russian Trophy by trucks and jeeps with shooting and unforgettable impressions. If you are interesting in unusual jeep tour in St-Petresburg - call us!